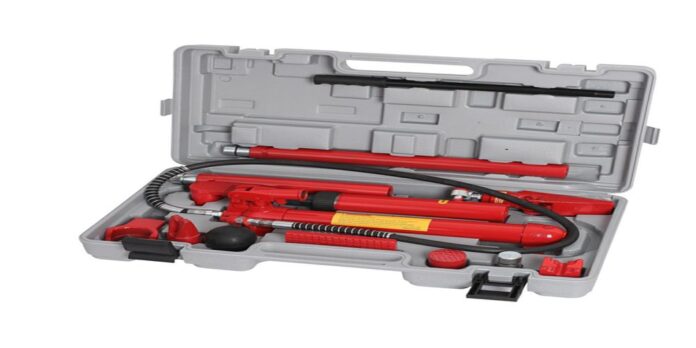 It is possible to apply brute force to specific areas of a 4×4 trailer or other vehicles with the help of a porta power. Rocker guards and straightening dent are the best uses for this tool, as is someone or something that needs a lot of force to be applied in a controlled manner. It’s made up of several parts. The hydraulic-jack-like pump has an on/off bleeder valve. In addition to the other components included in the kit, additional components can be purchased separately. It’s as simple as connecting the other part you want to use, closing the bleeder valve, and pumping. Even though they only travel a short distance, they do so with great speed and power.

Several different feet and tub lengths allow the hydraulic ram to extend its reach. Place it between two objects at a predetermined distance to push them apart, ideally only moving one of them. Tubes of varying lengths can be used to expand the distance between components or to bridge wider gaps. Pushing against a flat surface is made easier with the kit’s various feet.

When you use the pump to apply hydraulic force, the jaws open with authority. For separating two things that are close together, this is an excellent tool.

This isn’t part of the kit. Instead, it’s an optional extra. The small hydraulic ram pulls the two hooks together in the opposite direction.  Whenever we couldn’t figure out a good way to push the metal back into place, we used it to pull it back into place.

Porta power tools can be used for various tasks, including straightening, pushing, aligning, pulling, spreading, and more. They can help you get the job done faster and more efficiently. With the ability to adapt to any situation, they are essential garage equipment. It will be easier for you to get on with your day if you can find the tools to get the job done quickly and efficiently.

Porta-power tools can exert a large amount of force in a precise manner. If you’re unsure about how to use a particular tool, check the manual that came with it for details. You can also call a professional if you need assistance with your porta-power device.

Hydraulic tools are employed to help in shaping the metal that needs hydraulic power. Hydraulic pressure ports that can be rotated 360 degrees are common in repairing and restoring automobiles.

What is a Hydraulic Ram Water Pump?

It is a cyclic water pump run by hydropower that is known as a hydraulic ram, or hydram. Using the water hammer effect, this device creates pressure that allows a portion of the water used to power the pump to be lifted higher than it was when the water was initially introduced.

Porta power is a versatile and essential tool for anyone who works with vehicles or other machinery. With its many uses and applications, it is sure to make your work easier and more efficient. Be sure to familiarize yourself with the parts and functions of your porta power before use, and always follow the manufacturer’s instructions. Learn more about porta power and its benefits from the experts.

Factors To Consider When Choosing A Heat Pipe Manufacturer

The Best Raptors Jerseys of All Times

ABOUT US
We brings to you the latest and most popular news related to every kind of tech. Our platform contains news related to Technology.
© Copyright 2021- All Rights Reserved.
MORE STORIES
Technology